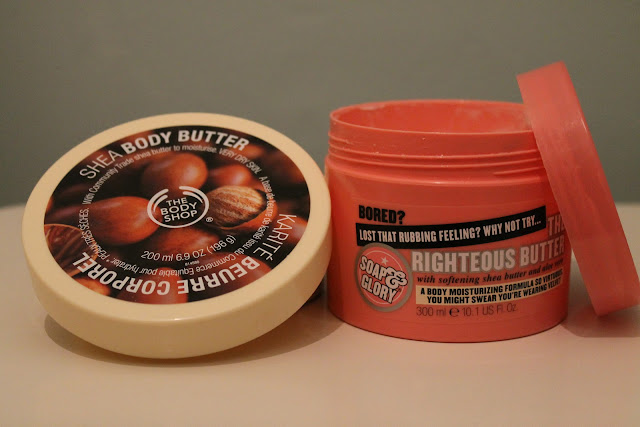 Pitted against each other today are two of my favourite body products. The Body Shops Shea Body Butter (SB) and Soap & Glorys The Righteous Butter (RB). Let’s start with the facts..
Shea Body Butter
£12.50
200ml
Righteous Butter
£10.50
300ml
Ok, so you might think right out of the gate that RB would be the winner on value right? Especially given the constant 3 for 2 offer in Boots on S&G products.. not necessarily! I was among the group that believed the Body Shop was expensive and overpriced until last Christmas when I discovered you can’t pay full RRP online if you try!! There’s always some deal code to be had and it’s often emblazoned across their homepage. Twice in as many months they had £25 off when you spend £50 which is a damn good deal. You get offers when you join you get offers off your next order… when you buy online The Body Shop transforms in to some kind of bargainous clearance bin of lotions and potions. I was converted! I took these photos intending to compare last month but never got around to it. Having just run out of these two butters and repurchased only one I thought now would be a good time. 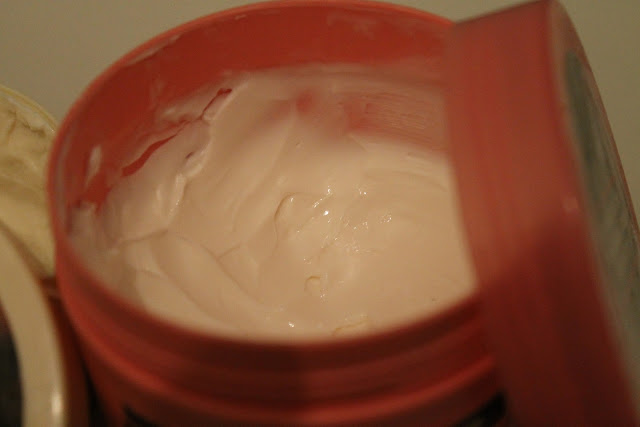 Let’s talk about texture. The RB is a typical Body Butter, thick and luxurious, all you would expect. It spreads nicely and soaks in well. The SB is a completely different animal. It is some kind of hybrid between what I consider to be a body butter and the original cocoa butter formula from Palmers. It’ waxier, thicker and it’s almost like as it warms on your skin it melts. Because of this a little goes a really long way. It’s not like applying a regular lotion its more like massaging actual butter in to your skin. It’s not unpleasant in any way just.. very different. The downside to this formula is it does take a long time to soak in and if you rub it too long you get those wretched ‘rolly’ bits and I end up having to wipe it all off which is a total waste of time!
The smell. It’s so tough to compare the two as they are two totally different scents yet I love them both. (side bar, got a little excited Vegas chill there, totally unrelated but 12 days to go!!!) The RB smells like everything from the Original Pink range from S&G which is generally beloved in the blogging community and proved so popular they even launched a fragrance baring the signature scent. I love that after using this I wake up the next morning and my room smells like Original Pink and I go to bed the following night and my bed smells like Original Pink. Bliss! The SB smells .. well like She Butter. If you know the smell and love it you’ll love this, simple as! It’s quite relaxing and a nice fragrance to have around you at night and as you go to sleep so that’s a plus. 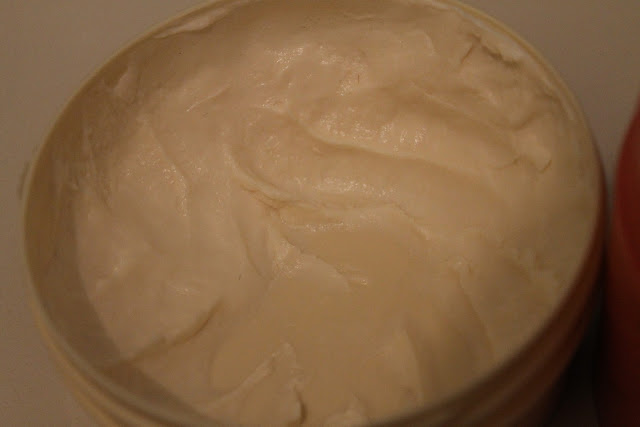 I would say these last around the same amount of time. I dont use them every day but if I did I might just get a month out of them. Although the SB contains less product it goes further so they’re even on value for money where that’s concerned. I would reach for the SB if I was super dry or to put on my feet before bed (ideal) but I would reach for the RB everyday for everywhere. It’s hydrating but it does eventually sink in where the SB doesn’t for me unless I’m very dry. I love both of these butters but I repurchased the S&G Righteous Butter for 2 reasons.
1. It’s more suited to my skin and 2. I buy it in the 3 for 2 and there’s just more from Soap & Glory that I use than there is from the Body Shop!
Everytime I near the end of a tub I tell myself I’m not spending £10 on another and I always do. In the last 3 for two I bought the butter obviously along with a replacement Wish Upon a Jar (needs it’s own review – ah-mazing!) and I’m trying the lotion version of the RB. It’s 50p cheaper and 200ml larger so look out for my comparison of the two coming very soon.
Have any of you tried these two? Which would you have chosen?
Miss BB