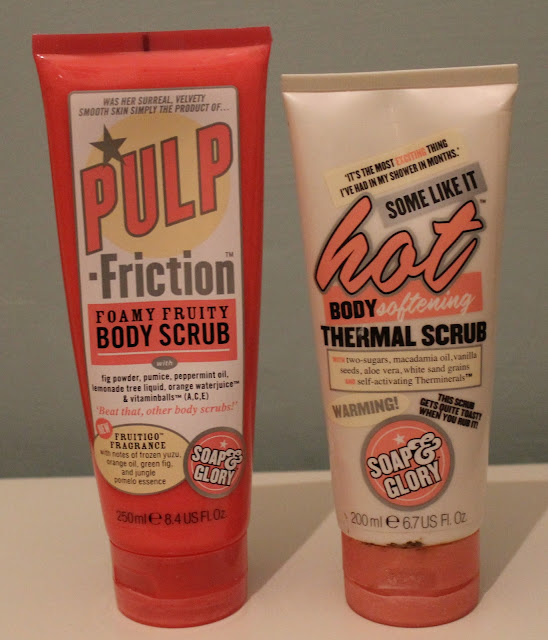 It’s like a civil war up in here today. Soap & Glory vs Soap & Glory. A battle to the body scrub death if you will. The two products pitted against each other are Some Like It Hot Thermal Scrub (SLIH) and Pulp Friction Foamy Fruity Scrub (PF).
First the facts…
Pulp Friction
£8.00
250ml
Some Like It Hot
£8.00
200ml
Ok so first and foremost SLIH is more expensive ml to £ and I can only assume that’s because of it’s extra ‘thermal properties’. Well.. that’s the reason I bought it and that’s the reason i was willing to pay what I consider to be a good chunk of money for a body scrub. I bought it when I was pregnant and suffering from unusually dry, flaky patches of skin so I felt I could justify the cost at the time. I generally enjoy anything that claims to be thermal and this was no different but unfortunately the thermal effect lasted less than 20 seconds so it was effectively then just a regular body scrub. It’s made up of very fine grains of exfoliant and it does the job but I was disappointed by the lack of heat.
The PF on the other hand didn’t claim anything special and so I guess I was more open to the fact it was just a scrub. It foams, yes but how much do you really want a scrub to foam? this had larger grains and as a result i perhaps didn’t feel as smooth as with the SLIH but you do get more for your money here and it’s still effective as a body scrub.
Ultimately neither of these products really rocked my kasbah and for £8.00 I expected more. I wouldn’t be in a rush to try another scrub from Soap & Glory though I’ve heard great things about their breakfast one. I prefer it in a tube as I generally scrub in the shower and a tub can get messy and there’s the chance of dropping it. These aren’t bad don’t get me wrong.. I just.. expected more from S&G.
Thoughts?
Miss BB