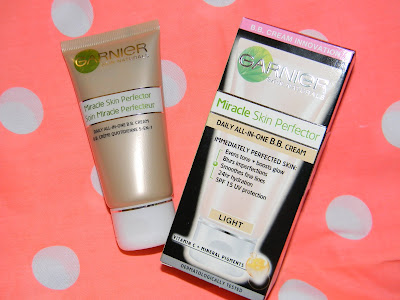 Garnier’s BB Cream is finally here. This hugely hyped product dubbed a “Miracle Skin Perfector” was one new launch I couldn’t wait to get my hands on and now I have it I just had to share my first thoughts with you. I have seen surprisingly few reviews and posts about this given the buzz surrounding it so I couldn’t get a real idea of how well it worked or what it did. Hopefully for those of you looking for just that.. this will help!
Firstly There are 2 shades available, Light and Medium. It retails at £9.99 and sold out and can be bought at Superdrug and Boots. The original BB cream was created in Germany but the craze really started in Asia where it was said to be the secret to Korean actresses beautiful skin. It soon became popular here to buy online and there was much talk on YouTube about these mystical creams for months before Garnier launched the first drugstore version. BB stands for Blemish Balm, there have been many variations made, some are said to have skin lightening properties, some are anti-wrinkle, some anti-acne. What Garnier are claiming to offer is a sun block and moisturiser that evens skin tone, boosts glow, blurs imperfections and smooths fine lines all in one wonderful tube. Ok so enough of what it’s supposed to do… here you can see the balm in action. Please excuse my early morning makeup free face. 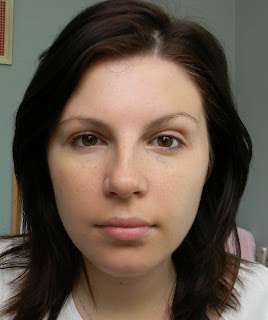 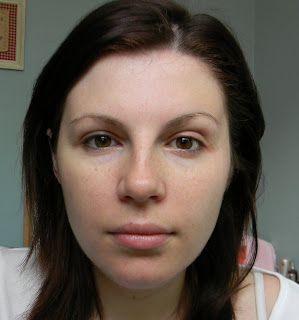 This is JUST the balm on my face, no concealer, nothing! I am really impressed with the coverage. I’m not sure it even is coverage. It’s almost like it really is blurring imperfections, evening out skintone and boosting glow. It feels weightless and moisturising when on the skin but it doesn’t leave me uber shiny like a tinted moisturiser would. I can explain it but I’m excited.
*********************
side note:
Can anyone else see that one of my eyelids is bigger than the other? It’s so rare I can capture it on film so everyone thinks I’m bonkers but seriously… it’s really obvious here… what’s it all about????
*********************
Here’s a swatch of the cream alongside some of my other foundations.
L-R
Natural Collection Tinted Moisturiser in Fair, Mac Studio Fix Fluid in NCW25, Garnier BB Cream in Light, Nars Sheer Glow in MontBlanc/Light2 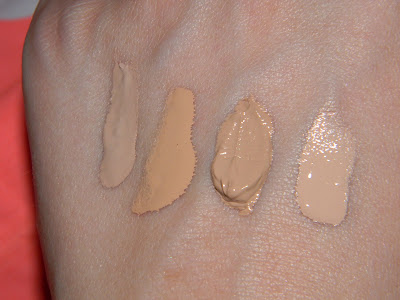 It’s a much thicker consistency than any of the compared products as you can see.. you might think that as a result it’s more moisturising and spreads further but I didn’t find this to be the case. I used this as an all-in-one so applied it to my clean face, no moisturiser/primer. I found it to be quick drying, it spreads like an oil free moisturiser so I needed more than I’d expected to cover my face and blend in to my neck. This being said I liked the coverage that it gave and it is buildable because of it’s thicker formula so it’s not all bad. I did get shiny in my t-zone/chin area by lunchtime but no more so than with any other product (except revlon colorstay) But I used a little powder to mattify and the coverage lasted me until I wanted to remove my makeup. I was impressed given that I was expecting little more than a tinted moisturiser.
I will do a more in depth follow-up review when I’ve used this exclusively for a few weeks so that I can really see whether it’s made any improvement on my skin condition. I’d love to think that it will and isn’t JUST a cosmetic product. Whether I repurchase this will really depend how long this little tube lasts me. £9.99 is more than I’d like to spend for what is quite a small amount of product (It’s just 50ml).. but I’ll see how it goes, if it offers real benefits to my skin it would be worth the cash for sure.
Have any of you tried this yet?
What are your thoughts?