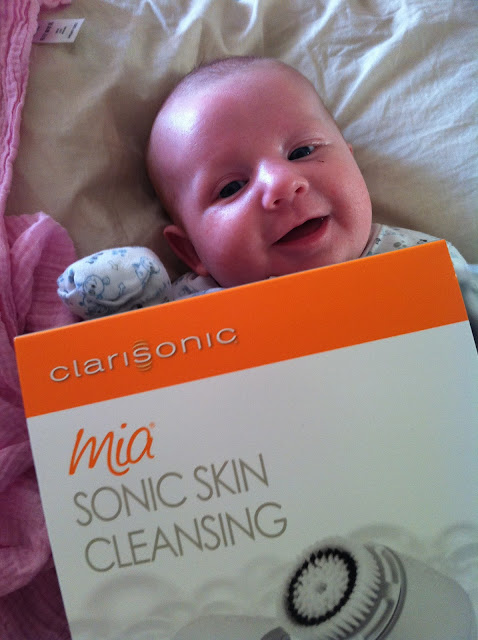 I think the day she arrived might have been one of the most special of my life (don’t tell the kids)
I have wanted a Clarisonic since.. well probably since I heard of the Clarisonic. the reviews were unanimous, I’d never seen an appliance – or anything for that matter – so consistently raved about before and I knew sooner or later I would have to have one. The initial hurdle was that they were only sold in the US. They were all over eBay of course but they had US plugs and the mark up was insane. Soon enough they hopped across the pond and Clarisonic launched a UK website.. now the problem was the price. The original is £155 which no matter how amazing is just way out of my budget. Last year they launched the ‘travel sized’ Mia version, you can choose from a range of colours, the charger has had an update and although the overall unit has downsized considerably the brush head has remained the same. This means that the replacement and alternate heads available are interchangeable between models and you’re not really losing out on anything but the size of the handle.. and why would you want that to be huge anyway? The other difference between the classic and the Mia is that the Mia has only 1 speed setting where as the classic offers to go down a notch.. but again.. I wouldn’t want any less speed so it would be a wasted feature for me. Now I know what you’re thinking.. ‘but isn’t it still expensive?’ Yes! Although the Mia is a more compact version it is still £120. For most of us that’s a lot of money for something replacing your old washcloth.
Having only been using this for just over a week I’m not in a position to fully review the system, I can’t tell you whether it’s worth the investment for you. Only you know if your skin would benefit. If you’re a hardcore exfoliator like myself then I would say almost certainly, yes. My skin can never feel too clean, I hate face washes that are missing those little microbeads and the Clarisonic leaves me feeling the cleanest I ever have and my skin has never been so soft.. and that’s only a week in. Already I can see my pores are less obvious and even acne scarring seems reduced. I wasn’t expecting to see results for at least a month and had heard my skin could get worse before it got better but (so far) that has not been the case. I had a stubborn blackhead which had been standing it’s ground for a good two months and it’s gone.. I am already just so much more impressed than I thought I would be.
Now like I said.. I can’t tell you how this will work for you, I can’t even tell you how it will work for me long term all I can  tell you is that I love my Clarisonic and if I had to go out and replace it I would gladly pay that £120! I am going to follow up with a more in depth post in a month or so and let you know how I’m getting on with her but so far Mia and I are becoming fast friends. 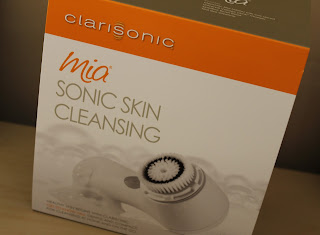 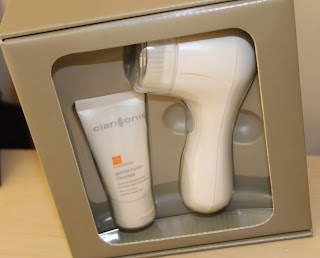 I want to mention the charger which you can see clipped on the the bottom of the handle in this picture (below). They call it a pLink which is oh so fitting as it’s kind of the noise it makes, it’s a magnet that kind of ‘clips’ on to the base with no plug or port of any kind.. it’s just plastic on plastic.. bizarre but it works. Once it’s charging you get a little acknowledgement in the form of a buzz and a green light in the back of the unit glows through the plastic. It’s all very sleek and swish. They’ve definitely taken some cues from Apple in the design department. The charger is also suitable for use anywhere in the world thanks to its compatibility with multiple volts so you needn’t worry about outing the rechargeable battery if you travel a lot. The brush supplied is a sensitive head.. I will probably switch that out for a normal one (brush head are £21) in a month or two when my skin gets used to the daily use. I’ve not suffered any dryness so far and am using my regular moisturiser (clean and clear dual action) so change there. I’ve tried two cleansers with the system up to now, Liz Earle and Cetaphil. I’ve heard conflicting advice on what formula’s to use but I thought I’d stick to non foaming for now to be on the safe side. I will no doubt branch out as I read more reviews.
The Mia does come with a 30ml sample of Clarisonic cleanser but it’s such a handy size I’m saving it for out Vegas trip. May have to test run it once beforehand to make sure my skin doesn’t react though.. boy would that be unfortunate for my honeymoon pictures! 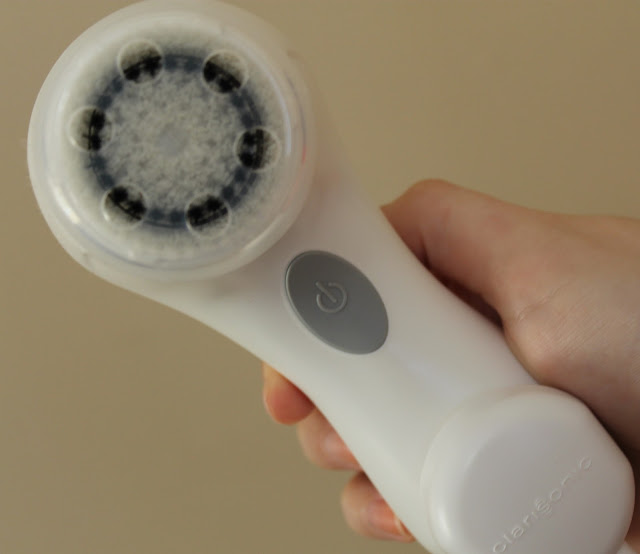 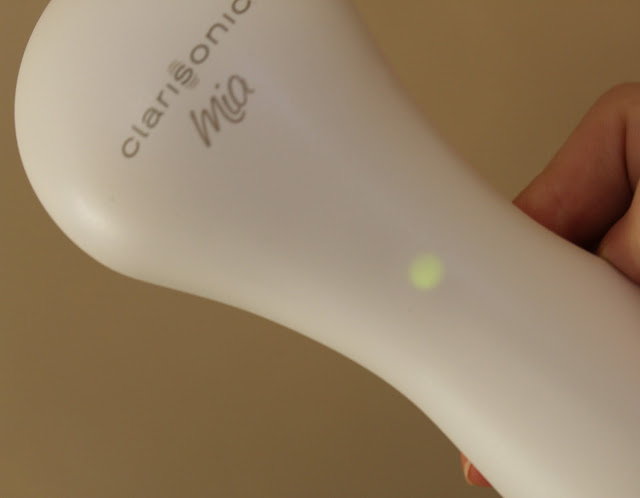 There are so many facts and random bits of information I could give you but this is such a well known product I’m not going to bore you.. ok just one.. Did you know the Clarisonic was produced by the same guy that invented the Sonicare toothbrush? I didn’t and found that interesting so maybe you will too…no? Ok, sorry! Anyway…  In summary, if you’re in the market for great skin this New Year I would definitely recommend you give this a go if you can stretch your budget. The Mia is available at FeelUnique for £120 where you can also buy brush heads for £21 and delivery is free.
I, however, got mine from Buyapowa. I’m sure you’re all familiar with them by now… although nobody was when I first posted in October (for more info you can find that post here). They have gone from strength to strength and the one product I wanted them to offer was a Clarisonic. You can request whatever you like as a “co-buy” and I campaigned in every video.. ‘go and vote for Clarisonic’ and low and behold it worked! They got it for just £90!!! It was gone in a day (boxing day no less, when nobody has ANY money).. well I have seen it appear today on their ‘Coming Soon’ page again.. so I guess it’s coming back! Good news for all of you that missed it the first time around. There is of course another reason I’m giving Buyapowa honourable mention here.. and that’s because I got mine for FREE!
Not because I’m a blogger, not because they like me (although who wouldn’t want to give me free stuff?.. Urban Decay? Naked II? No?) I got my Clarisonic for free because on the day I spread the word and brought in more “co-buyers” than anyone else. Once you’ve signed up for a product they encourage you to use your social networks to advertise the deals which of course works for them but if you get enough people on board it works for you too and what’s the risk? It’s already a cut price product but every time you buy you have the chance to win your money back. I don’t want to beat you over the head with it but I am so very impressed with everything I’ve bought from them so far, to get the one thing I was desperate for a discount on for FREE.. how can I not shout about that?
I’m sure everyone on twitter hates me right now ’cause I’m obsessed with this whole get it for free deal but I promise I’ll stop. I’m on a 12 step program! 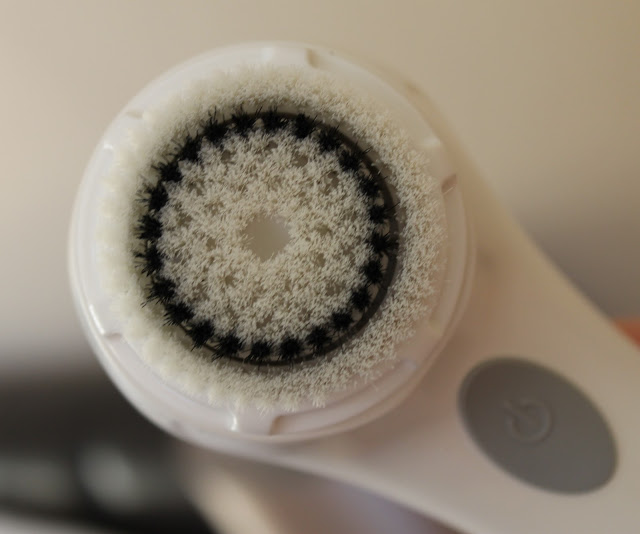