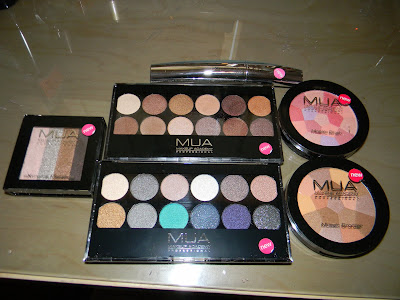 I have been eagerly waiting for this new range to launch since I heard it was coming and it has not disappointed! I have always thought MUA did the best drugstore shadows hands down and the price was just amazing at £1 each so I was holding out a lot of hope for some palettes on this new pro line. When I heard it was finally on Superdrug’s website I was like a giddy schoolgirl at a Justin Bieber concert.I think I was very restrained given that I wanted to try EVERYTHING, I picked up 2 Palettes, one Extreme Metallics quad, two Mosaic powders and the Extreme Curl mascara.
First I’m gonna hit your with some swatches… 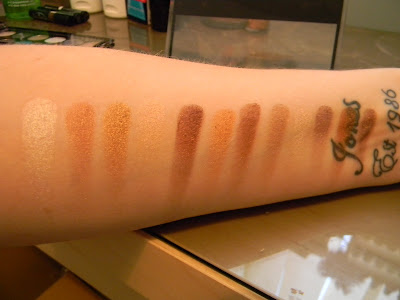 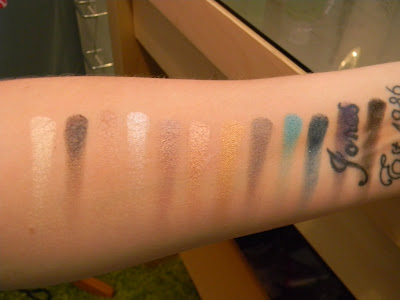 ﻿ Ok so I don’t have a swatch for the mascara but you can take a look at the wand/brush and it was black I assure you!﻿

So they all look awesome and the prices look even better but what did I think of the products when I got them home?
Eyeshadow Palettes
They were exactly as I thought they would be.They have learned from their initial bargain range that although matte shades add variety to what they are offering they aren’t so great for colour pay off so all of the formulas in the two palettes I have seen are metallic/shimmery and some even hold some glitter… very Urban Decay-esque. The Heaven and Earth palette was uber popular and sold out online nearly straight away. It’s all neutrals and of the two it’s definitely been my most used so far. I will at some point do a direct swatch comparison with the naked palette because while it’s different in many ways I think it’s the best drugstore equivalent I’ve seen and the price is incredible for 12 shadows. The Dusk Til Dawn is still fairly neutral but it throws in some party colours too.. if you were to pick only one it would probably be better value for money as it would offer more options.
Extreme Metallics Quad
This is dubbed as “a stunning range of colours that add intense shine and shimmer to instantly bring your eyes to life” They are advertised as wet and dry shadows which is why I’ve swatched them both ways above. Firstly I’ll say across the board the light colours from MUA don’t give a lot of colour pay off, you get a great sheen or shimmer but not much else but when you use these wet they are fantastic. They transform in to an almost cream consistency and really do look full on metallic on the skin. They look like a rimmel colour mousse or a MAC paint pot, they truly are as intense as they say! I will say this.. I doubt the formula is different to the regular shadows.. we all know most eye makeup gives more bang for your buck when applied wet and I would wager that these are similar if not the same as the others just spun as speciality shades but like I said these are just my first impressions here so I have time to change my mind.
Mosaic Bronzer/Blusher
Here’s where I felt a bit left down I’m afraid. With everything else MUA is so impressive and the pro line is no different but the two Mosaic Powders… not so much. As with most things it all depends on your expectations. I was expecting some colour but in actual fact these bronzers and blushers give more of a sheen . I haven’t had enough time with them to truly review them but so far for me they’re not what I look for in a bronzer/blusher.
Extreme Curl Mascara
This was also a tricky one for me because I don’t have great lashes for curling mascara.. I don’t actually know why I bought it. I can tell you that it didn’t perform any worse than supercurl from Urban Decay on me but I am going to refrain from sharing my opinion on this one until I’ve tried it on my long lashed friend.
I do intend to buy the volume mascara that I probably should have bought instead! For £2 I can afford to try them all!
What have you tried anything from MUA pro yet?