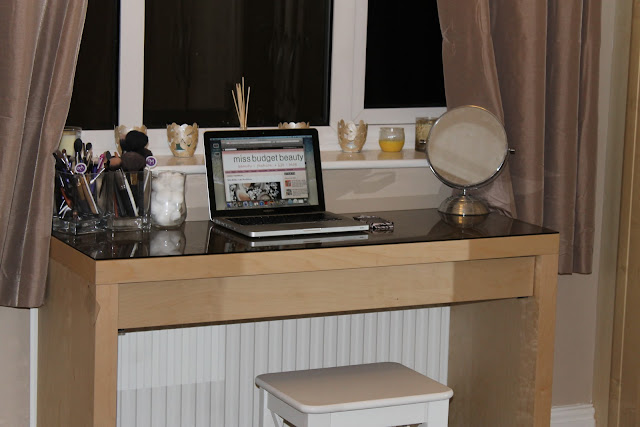 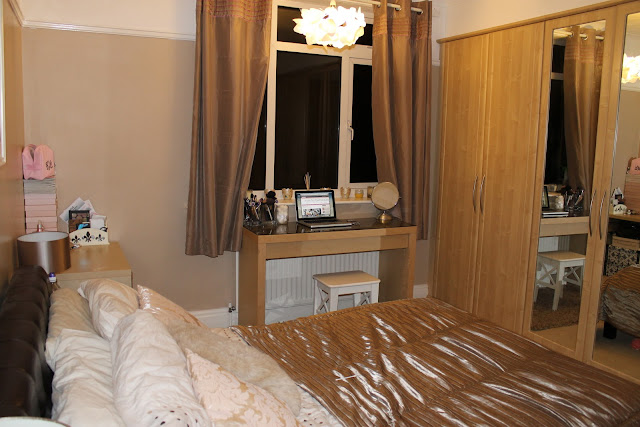 Firstly I’d like to point you all to Fee’s post today on MakeupSavvy.co.uk which was the inspiration for my afternoons productivity. I’m very easily influenced (as many beauty addicts are) and it took me approximately 5 minutes from reading Fee’s post to moving my first item of furniture. I was sitting on my bed admiring all of the beautiful natural light streaming in and wondering why I wasn’t utilising it. In my makeup room I had the worst lighting, the only good light I got was obscured and therefor uneven and shadowy. It had a small window on the side of the house that faced a brick wall.. not ideal! Much as I loved having my own little space it didn’t feel warm or even very “me”.. it was just where I went to get ready and film my videos. So lighting got the move started but another thing that appealed was I wouldn’t be able to be as messy. When you have a dedicated room for anything you can close the door on any mess you’ve made.. moving my makeup area to the bedroom meant I would never be able to leave my dressing table in a state like this again…. 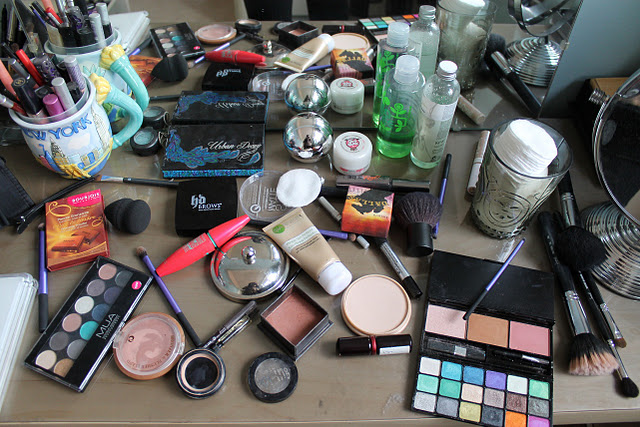 Getting ready day to day it doesn’t generally get this bad but after a couple of videos and not putting things away it can get worse… much worse! Stuff would pile up all over the place.. I could never find ANYTHING! So now I’m hoping my dresser will be a more organised, grown-up space.
For those of you that don’t know what my room and set-up were like before here’s a picture..
*sorry about the quality* 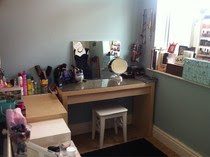 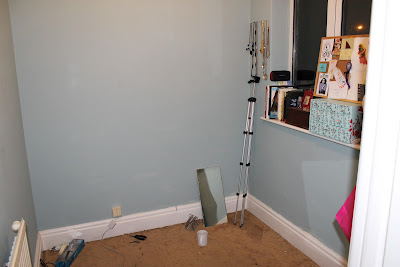 Everything is gone and it makes me a little sad but we needed a space to store our clothes in that limbo period between washed and ironed and somewhere to set up the ironing board – previously the nursery was that space but I don’t think Milo will appreciate that somehow.
So once I’m done taking all of my stuff out this will be that place.
If you follow me on twitter you will know that while reorganising the furniture I suffered a major trauma. Our crappy old BT phone socket was wrenched from the wall leaving wires connected to nothing and me disconnected from the world. I didn’t cry.. I just felt a little numb and continued my move. Intermittently I’d use the poor internet connection on my iPhone to try and find a solution but failed to find anyone with a similar problem or anything that told me what wire needed to go where. It was a dark time. Eventually I bit the bullet and called BT… I was informed that as I had broken the socket I would be charged £180 for an engineer to come out and fix it…. waaahhh!! Not what I wanted to hear AT ALL.
I’d all but given up hope when I stumbled across a site that talked about replacing the fascia on a BT master socket… MY SOCKET! It says everywhere online that you are not allowed to tamper with the socket, it is in all the BT contracts that you must not do any repairs, it all must be done by a BT engineer… well let me tell you.. before I shelled out £180 I was damn well going to have a go myself. The problem I had was the front of the box had come off and there were two loose black wires poking out… I had to strip the wires back so I had enough exposed wire to work with and connected them to the relevant places on the underside of the faceplate. I connected my router not expecting much but low and behold it connected straight away… faster than ever before in fact. To say I was pleased would be a massive under-statement. I know I broke it but by god I fixed it.. MYSELF from some very complicated looking diagrams and I am extremely proud of myself! I wish I’d taken pictures before I fixed it to show the state it was in but all I have to show you is it here in working order and masking taped-up within an inch of its life. I think it will need at least another layer of duct tape and possibly smothering in no more nails… that thing is never coming off again!!! 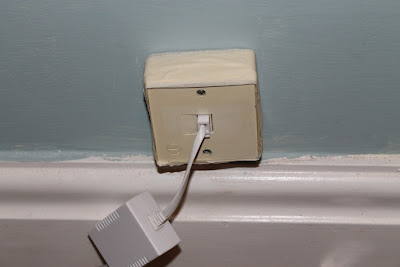 I know that was a totally non-beauty topic but you can’t imagine what it feels like for me to lose the internet… it’s like chopping off a limb. No exaggeration!
But anyway… the reason for the post was the big shift around which as I said was all down to Fee’s post…
My only words of warning would be.. don’t do anything ridiculous like I did.. much as I love my new set-up it would not have been worth the end of blogging and YouTube altogether… Fee nearly had a lot to answer for!
I’ll do a full post on my bedroom now it’s all done.. hopefully before Milo arrives and takes over everything. This will be a room I spend a lot of time in in the next few weeks so I’m really happy to finally have it feeling finished.