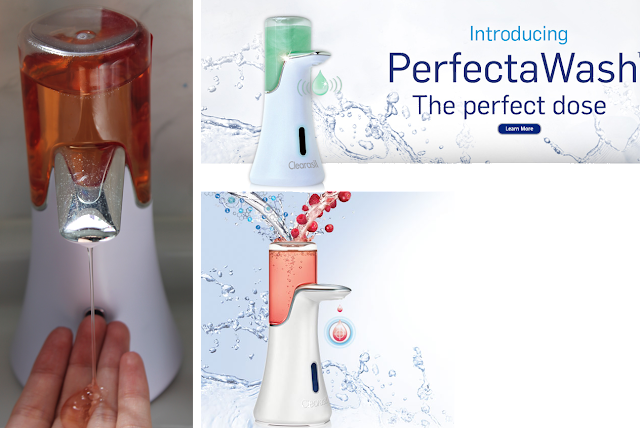 It’s official, I’m obsessed!
I haven’t been this excited about a skincare gadget since the Clarisonic, and although it doesn’t do anything ‘special’ it encourages me to keep up a morning routine I’ve never previously stuck to.
For those who don’t know, this is the Clearasil PerfectaWash. It’s essentially a dispenser for a regular face wash but the hands-free sensor activation means it’s much more hygienic and when we’re talking breakouts the last thing you want is to be washing your face with grubby hands! I use mine with my Clarisonic and it foams up nicely, smells gorgeous and leaves me feeling squeaky clean.
I can’t say much more about the cleanser itself as it’s pretty basic but does the job, the real star is the dispenser. If I could house all liquids in such a device I would. Saying that it does have it’s flaws. It gives you a measured dose of cleanser which  is good and bad.. you’re not going to use too much but if you want less there’s no way of getting it. Another thing is you have to be careful about is accidentally setting off the sensor when you’re doing other things. I, for example, ended up cleaning half my bathroom with PerfectaWash last week which left it smelling lovely but was a big waste of product. There’s a switch on the back to turn the sensor off which I now do when not in use but that kind of defeats the purpose of the hands free dispenser, no?

You can see here the refills are basically bottles that slot in to the machine.
They’re priced at £4.99 each and available in two formula’s and the dispenser itself is £12.99.
You can buy the range from Boots online here
Overall I like the system, I think it promotes hygiene (in theory) and gets us excited about cleansing again. Clearasil have always been a great drugstore brand for blemish prone skin so the cleanser itself was never in question, I knew it would work and it does but I’d never have tried it if it hadn’t been for my interest in the dispenser. I’m hoping they will collaborate with other brands to create new refills in the future but it’s my guess you’ll see other versions of this popping up everywhere soon.
Miss BB
*This was sent to me as a PR sample but as always but opinions are unaffected