For a while my Mum has been pushing Sheffield City Hall on us as a wedding location.
We were pretty set on New York/Vegas.. at one point she suggested Gretna Green as the Vegas is the UK but on closer inspection… not so much! So a friend at work recently married at City Hall and said it was lovely and it got me thinking maybe my Mum was right. I am horribly indecisive so until it’s booked (probably a week or two before we go ahead) I won’t be able to confirm what our definite plans will be but I am kind of coming around to this grand building that is really quite close by and where we could have friends and relatives attend if we wished. 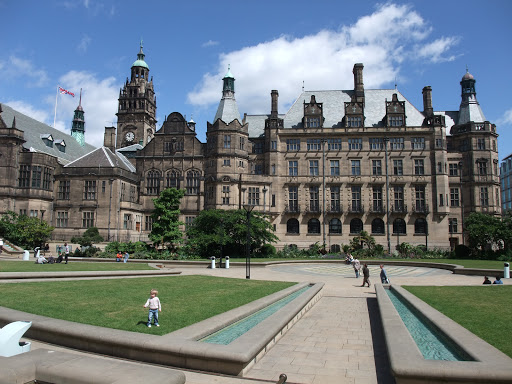 It backs on to the Peace Gardens which would be a beautiful setting for photographs and my Dad is a great photographer so we would have a free service in the attendance of my parents. I would really love my friend Caz to be there and we could all go for a meal somewhere afterwards… informal.
I’m not totally sold yet because we really wanted to do it alone so we can say whatever it is we want to say without worrying about what other people might think… I don’t want to censor myself or be nervous just because I have invited guests. I would ideally love to do the deed and have them waiting outside Carrie and Big style but I’m not sure they’d be up for that.. I think if they were coming down for a wedding they’d probably want to see it. I could maybe film it for them to watch later and feel more comfortable… ugh I don’t know! Anyway… You know I blog in the stream of consciousness and this is what is in my head right now!
xoxo
miss bb