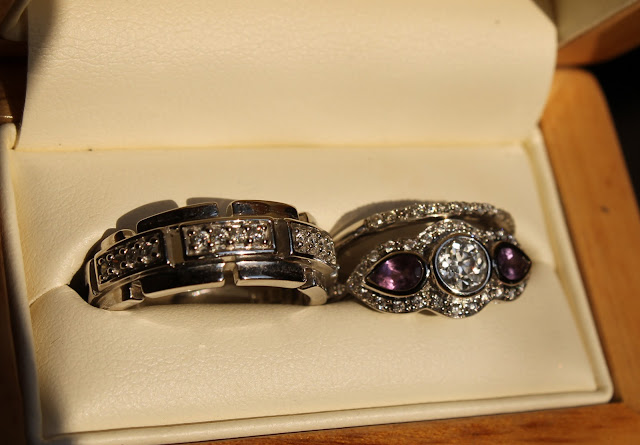 I’ve never shown the wedding rings before and since I just got my engagement ring back from the jewellers I thought it was the perfect time to take some photos. My new DSLR gets so much detail it’s incredible.. any photos I’ve taken in the past were just a blur so I’m really pleased with how these turned out.Those of you that have been reading for a while will know that I had a really hard time find a wedding band I was happy with. I ended up choosing a silver and diamond half eternity from Amanda Wakely (link here) which has increased in price since I bought it more than 6 months (maybe even a year) ago. The price of gold right now meant that I couldn’t get the look I wanted for less than £1000 which is just insane. Mixing metals is not ideal as harder metals can rub away softer ones over time but this is perfect for now and in the future I will look to upgrade. I do really like the idea that they are stacking rings and she’s just released a few new stone sets, unfortunately not amethyst but if she does I will be first in line, it would be perfect! Lee’s ring unfortunately has just gone in the sale (haha) so we actually LOST money on that buying it early but we’ve had it for so long it went up a third before they slashed it in half after Christmas. You can see that (here). I think he’s going to look out for a simpler band while we’re in Las Vegas as an alternate because it’s a little flashy for a man but he likes a bit of bling and he doesn’t wear any other jewellery so it’s not over the top. 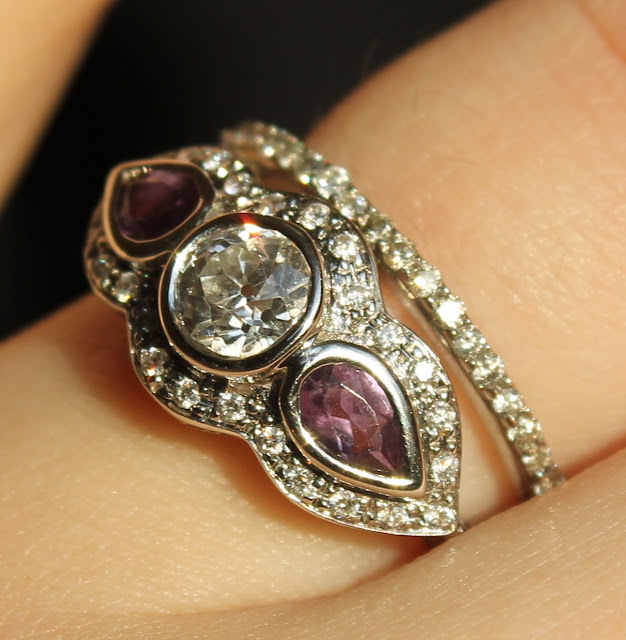 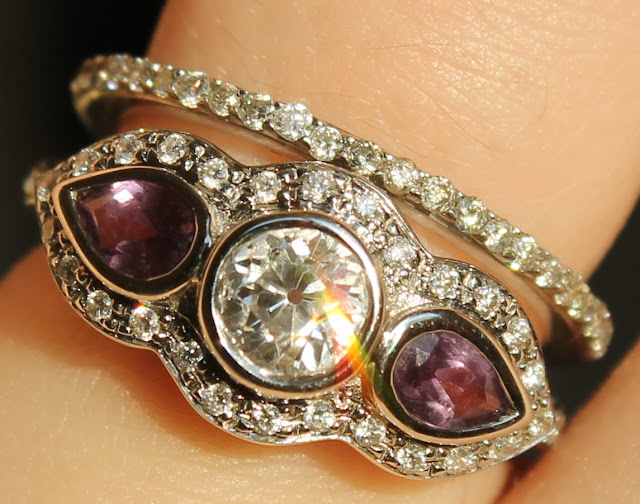 My engagement ring was made to my design with the centre stone from my Grandmas own engagement ring which I inherited. I love it, I wanted something vintage looking and originally considered using a large coloured stone as a wanted impact without the huge diamond price tag so adding pear shaped amethysts either side was perfect, amethyst is my birthstone. Did I mention that my birthday is 7 days after our wedding? Even more presents (haha). The centre stone is a rose cut which hasn’t been around since the early 1900s, it was second hand when my Grandma got it so it’s nice that it went in a less than modern setting. You can see clearly in the above picture the diamond wedding band is imperfect which does annoy me a touch but when worn together and seen at normal range it’s not noticeable (I made my peace). I do like that the diamonds around the band of my e-ring hit at the exact level of the half eternity, they look like they were made for each other in that way so I’m happy. Having been without my ring for 2 months I tried them on together today and got a little jolt of excitement! We’re getting married in 12 days! I’ve put the rings away and wont wear either until the morning of so as to keep them in tip-top sparkly condition. eeee!
Miss BB